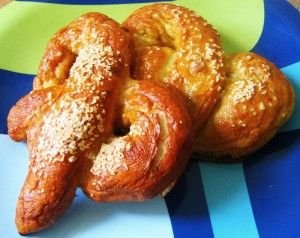 As you may or may not know, I have had a craving for a ball park soft pretzel for some time now. The good news about my cravings is that they are never really “gotta have it!” cravings, but more of a thought that remains in my head till I eventually have it kind.  So, since I don’t find myself at ball parks often, I have  yet to get my fix. Then, yesterday Captain Awesome calls me after work and tells me not to prepare the left overs I had planned for dinner. He said he had a surprise instead. Being the girl who doesn’t take surprises well, I made him tell me what he had in mind. And guess what? His idea was to drive to Mets stadium (20 minutes with out traffic, and 40 minutes with traffic) and get me my soft pretzel! How cute is that!? Little did we know that it would turn into a big adventure….

I was super excited for this idea. Finally, I’d get my pretzel. Another good thing about my cravings is that once I have it…most of the time I don’t really think about it again. So I was hoping that this would be it. We got in the car and started our trip, which of course included a lot of Long Island traffic (never fails). Granted it was 6:00, and rush hour…but still a pain in my butt! We got to the area around the stadium around 6:45 and started our search for the pretzel man. You see…the pretzel men have their carts set up outside the stadium for the fans before the games. But amazingly enough we couldn’t seem to find any pretzel men! Finally, we found one….only to realize that we had no cash. No cash = no pretzel, so our search began for an ATM. You’d think that would be easy these days considering their is a bank on every corner…but nope! Not at the new Mets stadium! We eventually found one at a gas station (good news since we also needed gas). So with cash in hand it was back to find a pretzel man.

We thought we were victorious! We found a pretzel man! So we hopped out of the car and to our dismay…wait for it….He was out of pretzels and was closing up shop! SERIOUSLY??? So we hopped back in the car to find a spot where The Captain knew a pretzel man always was (he’s been to a few Mets games this year…) We get there and of course…no pretzel man! So we hunt down a cop. The Captain pulls the “hello officer…I have a pregnant wife …” line and after the cop realized that this pregnant wife was in no emergency (you should’ve seen his face) he too admitted he was baffled as to why that pretzel man wasn’t there. So, with much sadness we drove off…

We drove…and we drove…and circled and drove…with no pretzels to be found. I just had to laugh because who would’ve thought?? Poor Captain Awesome tried so hard to be sweet and get his poor pregnant wife what she craves…but it just wasn’t in the cards. No pretzel for Jen….