My Boycott On Movie Theaters

My Boycott On Movie Theaters 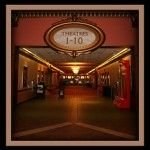 I have been told by some people that it seems as though I have many battles against many companies. I fight with a lot of them, most of the time losing, and then tell anyone who will listen how much I loath that particular thing or company. Today is no different. Today I want to talk about my boycott on movie theaters!

I am not sure if it’s always been this way, or if it’s the fact that movie stars are making upwards of 20 million dollars per movie, but movie prices have gotten out of control! I noticed that each time I went to the theater the price would raise something like $.25, and each time I would comment on it but continue to go. The other week my husband and I went to the movies. The cost per ticket was $11! Seriously? That is $22 for me and him just to get in the door! Then my husband always likes to get popcorn…$7!!! That is almost $30 for a 2 hour movie?? What do you get for that? A cramped uncomfortable seat…that’s what. I told my husband that we could BUY the blu ray DVD when it comes out in 3 months for probably less than that..own the movie and be able to watch it comfortably in our own home with a nice cocktail to go with it. That sounds much better in my book!

But this is the problem…people are still going to the movies! That $30 was just for me and my husband. What if we had a family? A night out at the movie would cost a fortune. So why do people do it? I get that there are some movie that just should be seen on the big screen. For example I really wanted to see Transformers, and Harry Potter on the big screen….but due to my recent boycott I had to refrain. I don’t see why we allow them to do it? I get that the movie theaters need to make money but come on! Maybe the actors shouldn’t make so much to be in the film? I mean their salaries are getting ridiculous.

I am not sure of the answer to this problem. The only thing I can do is stick to my guns and not go to the movies…if others join me …and others join them I think that is the only way to show them that we are not going to stand for it anymore!