If/Then The Musical: A Review

Home/reviews/If/Then The Musical: A Review
Previous Next

If/Then The Musical: A Review 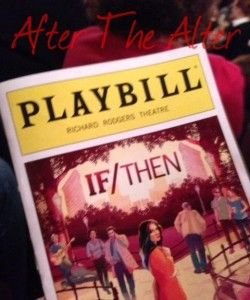 When I heard that Idina Menzel would be starring in the brand new musical IF/THEN on Broadway I jumped at the chance to get tickets. I have been dying to see her on broadway and this was my chance. I missed her in RENT, and I missed her in Wicked, but I wasn’t going to miss her this time around. I have always loved her voice, and I couldn’t wait to see her live. I also knew that with the popularity of “Let It Go” that I needed to move fast, or soon it would be like “The Book Of Mormon” where you can’t get tickets even a year in advance. Not this time. This time I jumped on the bandwagon early, and I am so glad I did.

When I thought of who I wanted as my companion for this show I immediately thought of an old friend who I haven’t seen in a very long time. I knew she would appreciate seeing Idina as much as I would, so I asked her to go with me and she said Yes! It’s always good to see a broadway show with someone who loves it as much as you do. It totally adds to the experience.

I knew nothing about the show going in. Not even the storyline, and I hadn’t even heard any of the music. Let me tell you…it’s the way to go! I got sucked into the storyline big time. What’s it about? Well I will give you just this…It’s a contemporary musical. The story breaks into two parallel lives of a woman who moves to New York to show you what happens when the woman makes one small choice differently. It’s about how one small decision can change your life in so many ways, and in so many ways it can end up the same. Is it fate? Is it choices? I try not to, but I think about that all the time. What would like be like if I made different choices? It’s great to see how it all plays out.

Idina doesn’t disappoint. Her voice is so amazing. I won’t claim that I am going to run out and buy the music, and I won’t say that any one song got stuck in my head, but the cast was amazing. Usually musicals are songs with a story line mixed in, and usually the story is lacking, but this is more of a story with songs mixed in. They aren’t the main draw. I believe the story is. I was dying to know how it would end! I’m not going to lie…I even cried…a lot. Like the kind of cry where you are trying to hold it in because you are in public and you don’t want to sob…I was that involved in the story.

An added bonus was that another original cast of RENT alumni was in the show. Anthony Rapp who played Mark in RENT was another amazing character. It was so great to see him live too. The role was perfect for him. I have to wonder who got involved in the show first. Did she bring him in? Did he bring her? But I digress…

I think Broadway needed a NEW and ORIGINAL musical. There are so many revivals and movies/books on broadway that sometimes I wonder if there is an original idea out there. Good news? There is! It was refreshing to be a part of something new.

If you get a chance to go see it GO! And don’t wait because I think you will be missing out if you don’t see the original cast. Everyone is cast perfectly. I give the show two thumbs up. You will be glad you went.