Home/marriage/Fighting and Marriage
Previous Next 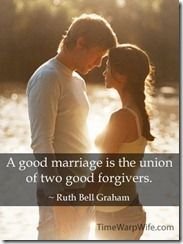 At my bridal shower we had everyone write down a piece of “marriage advice” and one that showed up a lot was “NEVER GO TO BED ANGRY”. Now that I am married almost 4 1/2 years I have learned that many times it is pretty much impossible. Especially in my marriage. Face it….we all have fights and if you are out there saying “ I don’t fight” then then I’d be calling “shenanigans! “ Having two people sharing a life is hard, and disagreeing is natural. It’s all about making sure that you can disagree and move on from it, and if you do in fact have to go to bed mad, that you can wake up in the morning and move on. Captain Awesome and I have always worried that our marriage wouldn’t survive the buying/selling of a house. We are currently right in the middle of it all and I will admit sometimes I have to wonder. I would be lying if I said we are coming out of this unscathed, but I am lucky to have a man in my life who doesn’t seem to hold a grudge. I can’t say the same for me, but it seems that the Yin and Yang approach for us works. Thank goodness for balance!

I have a tendency to talk things to death, and The Captain doesn’t really like to talk about things at all. Somehow, we always end up in the middle with me probably talking too much, and him not enough. It usually works out, but let me tell you that it can be extremely frustrating when someone won’t fight with you. You know that going to bed thing? Well it happens a lot because The Captain just hopes that if he ignores me that the situation will diffuse itself. Funny thing is that it usually does…but still…man is it frustrating!

I think what makes a relationship work is not only being able to communicate and work through the good times, but also being compatible during the hard times. After about 12 years of being together I think we have learned to navigate through hard times pretty well. This house stuff has been hard though, but we knew that. Like I said, we always said that if our marriage could making it through buying/selling a house we’d be golden. I am not sure if we are buying our “forever home” but at this point I do hope so because I am soooo not ready to go through this again any time soon.

Buying a house is such a huge purchase and it takes both of us to make it work. I am completely emotional, and he is completely analytical. I think with my heart and he thinks with his head and of course we disagree. I know that once the stress of all this passes that we will go back to our every day life and get along…but right now we may be close to ringing each others necks! I gotta say that sometimes I believe he doesn’t even like me! Does he love me? Of course….do I love him? Of course….but boy do I want to ring his neck sometimes!

We are so close to reaching our dream of a new home, and being so close also means working together towards a common goal. That common goal brings us both closer together and also farther apart. I feel so lucky to have such a great partner by my side. One that is constantly looking out for the best interest of our family. That is why we work so well together. He grounds me. He always has.

So I think we are going to make it. Thus far we have not killed each other, and at this point I see a light at the end of the tunnel. Maybe some day we can laugh at all this but for now lets just get through it. No matter what I know we have each other. Isn’t that what marriage is all about? Having a partner in good times and in bad? Well I have that, and I am thankful. I am thankful he thinks of things that I don’t and I hope he is thankful of the things I think about that he doesn’t (although I am not so sure he does now that I think about it….)

How do you and your significant other fight?