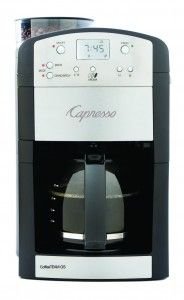 One thing I’ve missed since being pregnant is my morning coffee. I know, I know you are going to tell me that caffeine is ok in moderation, but I really have refrained from it. The most caffeine I’ve gotten is through chocolate and I haven’t really had much of that. I started drinking coffee just over 2 years ago when I started my wedding diet. I was told that a cup of coffee in the morning jump starts your metabolism, and I honestly believe that little change helped me out ALOT. So it really has been a change in the morning routine to not make my morning cup. When I was contacted and asked to try the Capresso GS Coffee machine I had to be honest and tell them that I personally wouldn’t be able to try the machine…BUT Captain Awesome has been dying to try a coffee machine that uses whole beans. Not to mention that soon enough I will be back to drinking my morning coffee. So with this knowledge they were kind enough to send me the Capresso GS Coffee machine, and boy is it pretty! (just look at the picture!)

Since I’m pretty much a coffee newbie (I still consider 2 years a newbie), I have never even bought whole beans for a coffee machine. My current machine took grounds. So since The Captain was most excited about that I went out and bought him some mocha java beans (although he says he doesn’t taste much mocha lol) What’s great about this machine is that you are able to store some of the whole beans in the actual bean canister. That way it dispenses what it needs and the rest can stay in there. You also are able to pick the coffee strengths (mild, regular and strong) which I thought was cool. I personally don’t like strong coffee, but you could make cups different ways. The smallest amount you can make is 2 cups, but really it’s like 1 cup in the modern day coffee mugs, so I would figure this 10 cup coffee machine can really make 5 big cups of coffee. A perfect amount for this household!

Another great feature is the timer. I have never had a machine that was able to do this! I know it’s nothing new, but you set it the night before and it has your coffee all ready and made when you wake up in the morning! Who doesn’t love to wake up to the smell of coffee? I still like it even though I’m not able to drink it!

Where can you get this machine? Well you can order through a bunch of places online…even amazon.com! They say it retails for $199, but you can order it from Amazon for $178.49 . If you aren’t much of an online shopper (I’m not either) you can find the Capresso GS Coffee Machine at stores such as Bloomingdales and Crate and Barrel. It’s a perfect item to add to any registry.

We really have been loving our Capresso GS machine. It looks great on our counter, is versatile, and makes great coffee. What more could you want? I know…to be able to drink some! (ok, I’ll stop being bitter now lol)