Today marks the beginning of my 11th week of pregnancy. I can’t say that the weeks have been moving any faster, but the good news is that time is in fact moving, and we are closer to the end of this trimester. Gotta see the positives right people? Week 11 means I am just two weeks away from that big first trimester appointment. I am starting to regret scheduling the appointment closer to the 13th week mark rather than the 12th, but it is what it is now. At the time we decided that it would be best to combine both the ultrasound appointment, and the blood results appointment into one day. Now, the idea seems like a BIG sacrifice since it’s just so far away.

They say that I will start feeling less tired come the second trimester. I am looking forward to this because I am just so exhausted all the time. I could pretty much nap at any given moment. Sunday night was the finale of one of my favorite shows…Lost…and that went till 11:30 which was WAY past my bedtime, but I made it through. Then Monday rolled around and it felt like I had been up all night long! The hunger is still there. Will that get any better or will I be hungry for the rest of this pregnancy. Trust me, I am not complaining about either of these two things, because if that’s the worst of my symptoms then I will totally take it. My food aversions are kind of going away. I don’t actually crave anything yet, but the fact that I don’t want to gag anymore when I think about food is a step in the right direction. I am still pretty much living off of cereal, peanut butter and fruit…ok you can throw in a lot of pizza if we are to be honest….and my waistline is happy that sweets currently aren’t at the top of my list of favorites. Speaking of my waistline, as you may know I have started to wear some maternity clothes. So that is the newest step in my pregnancy. It also has been a lot easier for me to openly talk about being pregnant with others. I didn’t keep the secret well, but I did sometimes feel nervous or uncomfortable like I would jinx something if I spoke about it. That feeling becomes less prominent as time goes on.

Let’s take a look at how Pool Bear is doing these days! 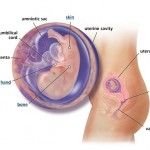 Your baby, just over 1 1/2 inches long and about the size of a fig, is now almost fully formed. Her hands will soon open and close into fists, tiny tooth buds are beginning to appear under her gums, and some of her bones are beginning to harden.

She’s already busy kicking and stretching, and her tiny movements are so effortless they look like water ballet. These movements will become more frequent as her body grows and becomes more developed and functional. You won’t feel your baby’s acrobatics for another month or two — nor will you notice the hiccupping that may be happening now that her diaphragm is forming.

It’s amazing to think that little Pooh Bear is inside my belly moving around and I can’t feel a thing. I can’t wait to see him or her at the next ultrasound. Everyone tells me how amazing it it to watch her/him flip around in there. We’re in the home stretch now!