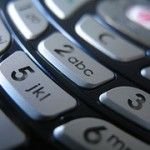 I have had many a battle with phone companies. I was a Verizon subscriber for many years, but after a huge falling out, I refuse to ever have Verizon Cell phone service again. (Down With Verizon!). After I paid to leave my contract with them, I switched to T-Mobile. I LOVED T Mobile and had no problem with them for 5 years. Right before getting married my husband and I decided that we both wanted to be on the same plan. It just made sense. He had AT&T and I had T-Mobile. We wanted to find the best plan possible and after tons and tons of research of my husbands part…we went with Sprint.

We made this switch in May of 2008. I decided I wanted to go with the Palm Centro. It allowed me to get e mail to my phone as well as the web and best of all it was Pink! I never had a smart phone before and didn’t know what I was missing! I loved the full keyboard and I loved having access to the web and e mail.

Now, fast forward 1 year to May 2009. At this point the world has gone Blackberry and iPhone crazy! In my head I know that it’s a trend and that it’s stupid to pay so much for a phone…especially since my plan of $49.99 gives me e mail, unlimited texts, unlimited internet and 1200 minutes with free nights and weekends….but I have to admit that at this point I am ready to learn what all the fuss is about. So I was ready to bite the bullet and purchase a blackberry. I mean every person I know who has it LOVES it! And I certainly don’t feel the same way about my phone…so I’m ready to try. So I contact Sprint to make the change and what am I told? That I am in a 2 year contract and that the only thing they can do for me is give me the one year deal of $75 off the phone….How much does that make the phone???? $450! Seriously? Who pays that much for a phone? Do you know how much you can get the phone on the Sprint website if you are a new customer??? $50! (after mail in rebate).

I must go back to my sentiments from a previous post about why companies don’t want my business…why is it that a company values NEW customers more than they do their loyal CURRENT customers? My husband tells me it’s a math problem (he should know better than to talk math with me). He says that Sprint loses money when you originally buy the phone, but makes it back by making you stick around for your 2 year contract. And I totally get that…but here’s another math problem…If I chose to leave Sprint and pay the $200 cancellation fee and go on Amazon.com where I could pretty much get a free blackberry if I sign up for another service provider…then I am better off than paying the $450 for a Blackberry with Sprint! But you know what? The Sprint customer service wouldn’t budge. Not one bit! I even went into a bit of a rant about how they should value current customers, and how I really actually did like Sprint. But in the end they called my bluff…there is no way I could switch. That $49.99/month is soooooo much less expensive than any other phone service I could go to. So who would I be spiting??? MYSELF!

The bigger problem now is that I want the Blackberry even more now that I can’t have it. Don’t you hate when that happens? Sprint may have thwarted my plans this time…but don’t think they’ve won. I don’t think they know who they are messing with. The score at this point may be Jen: 0 and Sprint: 1….but not for long!